In my last post in the 7 Baby Steps series, we looked at Baby Step 1, saving up an emergency fund of $1000.

You save up that baby emergency fund in order to insure yourself against the risk of life's little emergencies that have a way of popping up at the least opportune time.   If you don't save up that money as an insurance policy, you can be assured that your plan to get out of debt will be set back many times over by many little “emergencies”.

Today we will look at Baby Step 2, paying off all debt using the debt snowball.

Pay Off Your Debt Using The Debt Snowball

Now that you’ve got your $1000 emergency fund saved,  it's time to get intense about paying off all your debt.  Dave Ramsey likes to call this getting “gazelle intense”, in reference to the bursts of speed and intensity a gazelle will use in order to get away from a cheetah (or in our case, debt).

For many people this step is the longest in your 7 baby steps.

If you’ve  built up a lot of debt over the years in the form of student loans, auto loans, credit card debt and other things, it probably took you a long time to get so far in the hole, and it will take quite a while to dig your way back out.  But you CAN get back out!

If you're not so far in the hole, getting out of debt can happen a lot quicker, and you can get on to the next steps of building up a larger emergency fund, paying off your home early, building wealth and giving more.

If you've gotten this far and you haven't done a budget yet, now would be the time to get started.

Figure out where you are in regards to your income, expenses and your debt obligations.  Do a zero based budget and make sure that every dollar is accounted for – because every extra dollar is now going to be going to debt reduction.

Once you’ve got all of your income, expenses and debt listed, follow these steps to get rid of your non-mortgage debt. (Mortgage debt is paid off separately in another baby step, so exclude it for now)

Here is a rundown of the debt snowball plan. 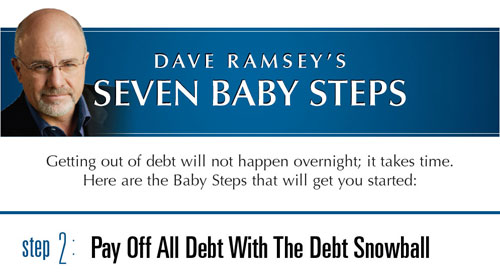 That's not too hard, right?  Just pay off your debts from smallest to largest until they are all paid off!

Other Methods Besides The Debt Snowball

If you read the personal finance blogs you'll read a lot of posts talking about how Dave Ramsey is bad at math, or how he is not giving people the right advice because his debt snowball plan isn't technically the most mathematically sound way to get out of debt.

Those people say that in order to do it the best way, you would need to list your debts from the highest interest first, to the lowest interest, and pay them off in that order.   Once they’re in order you pay the minimums, and put any extra money towards the highest interest debt first.   Some have called this the debt avalanche.

Mathematically the debt avalanche IS best way to get out of debt.

When you pay off  the smaller debts first you get what he calls “quick wins” that give you that psychological boost that help to keep you motivated and keep you on the road to debt reduction.

With other methods, too often you’ll end up burning out and giving up on debt reduction.  In his eyes, after working with thousands of people to get out of debt, he has found the debt snowball to be the most sustainable debt reduction method.

When it comes down to it, however, I don't think you can go wrong with either method. As long as you're disciplined, and are determined to get out of debt, do the one that works best for you – or do a hybrid of the two!

As Dave Ramsey says, “You can’t go wrong getting out of debt“.

No New Debt, And A Commitment To Paying Off The Old Debt

If your plan for debt reduction is going to work, you need to make sure that you're doing a budget, that you've committed to creating no new debt, and that you work HARD towards paying off your old debt.

Here are a few things you can do to help make your debt snowball much more effective.

Work  hard, sell things, get extra jobs, and just get intense about your debt reduction plan and you’ll have your debts paid off in no time!

What’s your opinion of the debt snowball?  Have you used it, or the debt avalanche – or another system – to get out of debt?  Tell us about it in the comments.

Previous Post: Buying A Home: When Is The Right Time?
Next Post: Dave Ramsey’s 7 Baby Steps: Step 3 – 3 To 6 Months Of Expenses In Savings