The last few months we've had quite a bit of uncertainty when it comes to what will happen to our 2011 marginal tax rates. The Congress and President Obama have gone back and forth trying to work out a deal on extending the current tax rates. First there was no consensus on whether they would extend them for all taxpayers, or only some. Republicans wanted them extended for everyone, while the Democrats wanted them extended for everyone except high income individuals.

After the election at the beginning of November, however, President Obama took on a decidedly different tone when it came to the tax rate extensions. His party had lost power in the House, and he was now more open to a compromise to get something done.  He doesn't want to risk having the rates go up on the middle class and poor, and admits that raising the rates while our economy is down like it is – wouldn't be the course he'd want to take.

A couple of weeks ago President Obama met with Republicans and hammered out a tax cut package that would extend the current tax rates for another 2 years.  Also included in the package would be a social security tax holiday, in addition to an extension for 13 more months of unemployment benefits for the long term unemployed – which lapsed last month.  Details of what is included in the package: 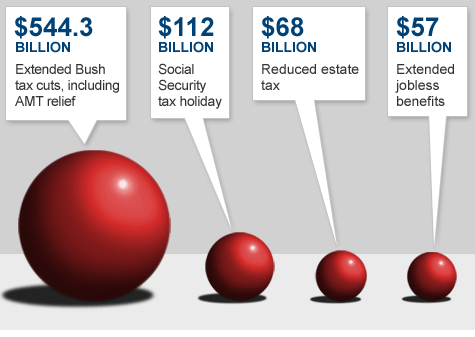 Where Is The Tax Cut Package Now?

As of this week the tax cut package is still working it's way through Congress.    Yesterday the Senate passed the package overwhelmingly, and it now moves on to the House.

The Senate approved a controversial $858 billion tax cut package Wednesday, overwhelmingly voting to extend the Bush-era tax reductions despite a series of objections from both the left and the right.

The measure passed 81-19 to advance to the House of Representatives, which will take it up on Thursday, according to Majority Leader Steny Hoyer, D-Maryland.

The package includes a two-year extension of the Bush-era tax cuts set to expire December 31. It also would extend unemployment benefits for 13 months, cut the payroll tax by 2 percentage points for a year, restore the estate tax at a lower level and continue a series of other tax breaks.

So one of the key hurdles, passage in the Senate, has now been cleared.The problem? In the House some of the Democrats have threatened to change certain provisions of the bill that they don't like, which could derail the compromise.

A number of House Democrats, including Speaker Nancy Pelosi, D-California, want to change the estate tax to levels previously approved in a separate House bill that would exempt inheritances up to $3.5 million and tax amounts above that at a 45% rate. Pelosi said Wednesday the change would bring in an additional $25 billion instead of providing tax protection to only 6,600 more families through the lower rate and higher exemption in the negotiated tax deal.

Some moderate Democrats have called for the House to pass the bill unchanged. So now we'll have to wait and see if the measure will be changed, and if so, what that means for hopes of it passing.

The House Rules Committee decided Wednesday night to allow a vote on changing the estate tax provision to the levels in the previously passed House bill. If approved, the changed bill would then go back to the Senate. If rejected, the House would then hold a separate vote on the Senate version, with approval sending the bill to Obama.

Republicans involved in the negotiations with the White House on the package have warned that any changes by the House could derail the entire proposal, causing tax rates to increase in 2011.

So now we wait and see what happens with the bill – if the House votes to change the estate tax provision, and if so, if the Senate will allow the changes. Some have said that such a change could derail the deal, and could mean that marginal tax rates go up on January 1st. We shall see!

UPDATE: Sounds like the House passed the bill now as well, 277-148. Both parties contributed almost an equal amount of votes to get it to pass –  139 Dems, 138 Republicans.  All that remains now is for the president to sign the extension.

What do you think will happen? Will the compromise package be passed, or will changes be made to the package that sends it back to the Senate. Tell us what you think in the comments!

Previous Post: Number Of Underwater Homes Declines, But Foreclosures Are Up
Next Post: Starting A Side Business: Making Money From Blogging