If you are at all connected to the Internet, you understand that gaming has become a vital part of our economy. Top manufacturers like EA, THQ, and Rock Star have cemented themselves in the gaming industry and procured licenses that generate a ton of revenue for clients such as the NFL, MLB, and WWE. In order to make money off of their expensive licenses, however, they have to start charging consumers more money to play the games.

What if there were ways to save money on your gaming needs instead of constantly racking up credit card bills and feeling like a consummate consumer every day? Consumers often fall into hidden traps and holes when it comes to their video game dollars. Here are some ways you can get the most entertainment out of your video game budget without raising your checking account rates: 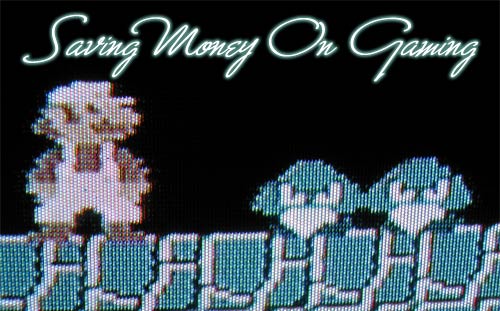 If you are just getting into video games, you may be shocked that the latest titles can run you in excess of $60 a pop. In order to avoid paying these premium prices, you can visit a variety of retailers to purchase the latest titles for less money because they have been opened already.  Stores like Best Buy, Gamespot, Amazon and others will sell used games at a lower price. Buy used instead!

The worst feeling in the world is purchasing a new video game only for it to be awful. Spending any kind of money and then receiving a lackluster game can make the most die-hard gamer feel a little used. Instead of purchasing games as they come out, sign up for Gamefly. By subscribing to the service you can receive games in the mail for as little as $7.95 a month.  Other services like Redbox kiosks will also allow you to rent a game at a fraction of the cost.  Rent instead!

One of the best eras in gaming is the original NES and Sega Genesis days. Games were simple and easy to figure out, which provided a lot of fun for everyone. Today if you want to play Super Mario or Sonic the Hedgehog, you are going to have to get a Wii or spend a bunch of money on eBay where the consoles have become collector's items. By downloading Roms and emulators you can play these classic games for free on your own computer.  Play free classic games instead!

Stay Out of the Controversy

According to the Cato Institute, the government has been trying to legislate video games for the longest time, they feel like they have a right to tell parents and families what is best for their kid's safety when it comes to video games.  According to many, however, video games haven't been shown to have any link towards violent or abberant behavior – in some cases the opposite is true.

If you think video games are a waste of time, you may not be completely on target. The United States Military uses simulations from the leading game manufacturers in order to train soldiers and prepare them for real combat operations.

Think interactive video games are a waste of time or more suited for children? Think again. Research under way by the Office of Naval Research indicates that video games can help adults process information much faster and improve their fundamental abilities to reason and solve problems in novel contexts.

By purchasing titles for your children, you are making an investment in their education!  Just think about all of the problem solving capabilities they will develop from playing complicated games.

While gaming is not for everyone, the popularity of gaming is continuing to grow with the biggest game titles making more money than Hollywood blockbuster movies!  Games are leaving their mark on the overall economy.

Major gaming companies will continue to charge so much for their products simply because people are buying them. In order to save money on your games, shop smarter and do your research before committing to anything.

Have your own tricks for saving on video games? Tell us in the comments.

Previous Post: Paying For Your Child’s College Tuition
Next Post: How To Choose Good Tenants For Your Rental Property