When your income doesn't come in 24 equal payments spaced evenly throughout the year it can be hard to make a budget. Unfortunately, this is a fact that a lot of people deal with in their life. There are a lot of industries where the pay is great in the summer time and then tapers off with the chill of winter. Or even vice versa. If you aren't careful with your budget throughout the year you can find yourself in a pinch in the off-season.

I was talking to a friend of mine who is a realtor. She was saying her income is great in the summer but then in the winter she has a hard time making ends meet. People would prefer to move in the summer since the kids are out of school and the weather is nicer, and no one wants to move around the holidays. She wanted to know how much she should have in her emergency fund to cover her winter expenses.

But I actually felt she was looking at it the wrong way. An emergency fund for emergencies and her winter expenses aren't emergencies. She knows these bills are coming, so she should plan for them, outside of her emergency fund.

The first thing she needs to do is figure out what her average monthly income is and make a budget based on that average. Part of her budget should include debt elimination, if she has debt, building of her true emergency fund, and future investments. Along with that she needs to put some money into an emergency fund. A little bit of money, not the full 3-6 months right away. She just needs to protect herself from a normal sized emergency right now.

Let's look at some pictures. (hand drawn by yours truly) 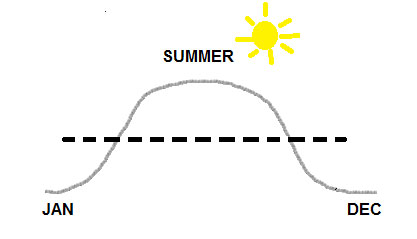 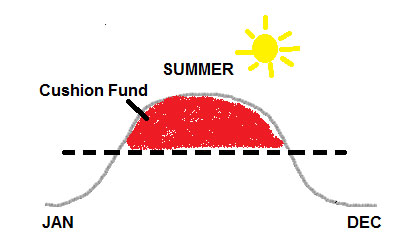 This system allows her to plan for her reduced winter income and also be prepared for a true emergency should one arise. Right now, at the end of summer, she is feeling very stressed knowing her income is going to go down soon. But if she follows this plan, next year will be a different story. She probably still won't like receiving those smaller checks, but at least she will have a plan to put food on the table.

Do you have an irregular income? How do you handle it?

This article was written by Ashley over at Everything Finance. Everything Finance is a site about just that, everything related to finance. You can get information about investing, saving money, shopping, blogging, and making money online. If you like what you see here, make sure to stop by or better yet subscribe to their feed so you don't miss a thing.

Previous Post: Are You Seriously Committed To Saving, Or Still Committed To The Short-Term?
Next Post: Grandparent Scam Strikes Again