Last year around this time we were in the middle of tax bracket drama as our elected officials in Washington D.C. were fighting over whether they would be extending the Bush tax cuts of the early 2000s (making them the Obama tax cuts?), or whether they would allow them to expire and rates to go up for everyone who pays taxes.

In the end Obama and the Democrats agreed to extend the tax cuts and in exchange were able to get the following concessions from Republicans: 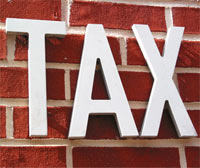 The parts that affect most people include the extension of the rates for everyone (ensuring that taxes don't go up), and the reduction of the social security tax levied on worker's wages.

After this year, for the tax year 2012, social security tax levied on worker's income will be going back up to 6.2%.  Get ready for the outcry!

For the 2012 tax year, the tax rates have not been released as of yet, but several groups have projected what the rates will be.  The rates are calculated by the IRS with a complicated formulate based on inflation rates among other things.  Thankfully we don't have to figure it out on our own.

As you can see, the rates haven't changed much from previous years, just some slight upticks in the lower and upper ends of each bracket.

For comparison's sake, here is a look at the tax rates for 2011.

The standard deductions for married and single filers are projected to go up slightly as well.

No Drama This Year, But Wait Until Next Year

So while the rates are seeing only slight changes this year  due to inflation, next year could be shaping up for another battle. Not only will it be an election year, but the extension of the Bush tax rates will be up for debate again as they expire at the end of 2012.   Buckle your safety belts, it's gonna be a bumpy ride!

What are your thoughts on what we could see next year when it comes to the tax rates?  Will there be another battle about extending the rates?

Previous Post: Here Come the Holidays: Could Layaway Save Your Christmas Budget?
Next Post: When To Take Social Security: A Question Of Cash Flow