The past few years have been rough ones, and we have seen our unemployment rates go from 4-5% all the way up to 9.8% as of last month's unemployment report. As bad as 9.8% sounds, could the situation be even worse that that? Could the actual unemployment rate be even higher?

What Is The Actual Unemployment Rate?

When we look at the unemployment figures that the government puts out we get two figures. First, we get the standard jobless rate, which only looks at people who have reported looking for work in the past 4 weeks.  Then, we get the real (U6) rate, which also takes into account the number folks who are either underemployed or have stopped looking for work because they can't seem to find anything. From MSN:

The official unemployment index, based on a monthly survey of sample households, counts only people who reported looking for work in the past four weeks. It doesn't account for part-time workers who want to work more hours but can't, given the tight job market. And it doesn't include those who have given up trying to find work.

When the underemployed and the discouraged are added to the numbers, the unemployment rate rises to 16.6%. The Bureau of Labor Statistics, a unit of the Labor Department, began tracking this alternative measure — known as the U-6 for its department classification — in 1995 after economists lobbied for a method comparable to the way Japan, Canada and Western Europe count their unemployed. 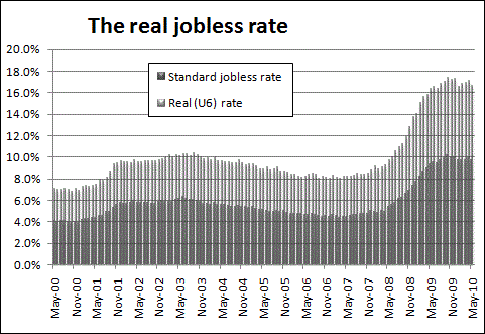 The problem with the unemployment rates don't end there, however.  The problem?  There are even more people it doesn't take into account who are having a rough go of things:

The truth is that even the broader measure of unemployment doesn't fully capture how difficult the job market is for U.S. workers. It doesn't include self-employed workers whose incomes have shriveled. It doesn't look at former full-time employees who have accepted short-term contracts, without benefits, and at a fraction of their former salaries. And it doesn't count the many would-be workers who are going back to school, taking on more debt, in hopes that advanced degrees will improve their chances of landing jobs.

So when we hear of a the unemployment rate being less than 10%, we need to keep in mind that it is only one statistic that shows it being less than 10%.  If other factors are taken into account the real jobless rate is higher than 15%.  Remember the old saying about statistics popularized by Mark Twain?

‘There are three kinds of lies: lies, damned lies, and statistics.'”

You can get statistics to say just about whatever you want.

Jobless Are Unemployed For Longer

Not only are there more people unemployed nowadays than we might think, a lot of those people are unemployed for longer than was common in the past.

It has also been suggested that the availability of extended unemployment insurance benefits has contributed to the increase in unemployment duration. [source]

Because people are out of work for longer, and because there are more of them, the situation is thought to be more dire than other recessions in recent history.

“That largely reflects how more severe this recession has been than of 1982 and of the 1990s,” said Bernick, who has worked in the job-training field since the late 1970s.

Now, although severe layoffs are no longer occurring, hiring has not picked up significantly.

So things are tough out there, inflation is coming and things are probably even tougher than some of the common statistics would show.  At least for the near future, it doesn't appear that things will be getting much better, at least until companies start seeing a turn around, the tax situation stabilizes and they are able to start hiring again.

Previous Post: Going Broke After Having Millions: How One Millionaire Family Lost It All
Next Post: Will The Bush Tax Cuts Be Extended In The Lame Duck Session?