I was reading my recent issue of Consumer Reports Money Adviser when I came across a small item on deceptive mortgage ads. I've seen a few of these myself recently. You've probably seen them as well. They appear online, on TV, in the newspaper, and even in direct mail to your home. I've lost count of the number of “FHA refinance” letters I've received in the mail in recent weeks.

It's important to be on guard when you see these ads, since they often promise something that is too good to be true. Some of the items you might notice in these ads include:

While it's true that there are some government programs out there to help you refinance your home, you need to be careful about answering these types of ads.

My Efforts to Refinance

I am going through a refinance under HARP. (Or at least trying to go through one. Income, as always, is a snag because mine and my husband's are both irregular.) I've been thinking about refinancing for a long time, but have hesitated because I'm not sure when we will move. When I talked to my banker, it was a rather discouraging experience, so I put it out of my mind for a while. 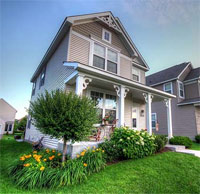 I started thinking about it again when the direct mail ads started arriving — at a rate of three or four a week. I didn't seriously think of using any of them, though. A lot of the letters included very vague information and promises of fixed rates below 3%. Additionally, the FHA logo was prominent. Upon flipping over many of the letters, though, and reading the fine print, two things became apparent:

If you aren't watching carefully for these items, they might slip past you, causing you to feel that you are getting a great deal, and that you are protected because the FHA is involved.

My own refinance is being handled through a reputable, major company that I sort-of approached (with the help of Quizzle). Rather than answering an ad seen randomly on the Internet or sent to me via direct mail, I started the process mostly on my own.

Before you agree to a mortgage, make sure you read through the terms, and you understand the entire loan. And, if you are concerned that you are seeing deceptive mortgage ads, you can get more information from the FTC.