As the economy continues to limp along, and with the recent announcement by the Federal Reserve that low interest rates are likely to continue into 2014, an increasing number of people are skeptical of the currency that we accept as legal tender. Federal Reserve notes are starting to fall out of favor. But what can take their place?

Some investors decide to invest in precious metals as a way to hedge against inflation and the loss of value expected of the U.S. dollar. Others, though, have decided to turn to local currencies in order to transact business. 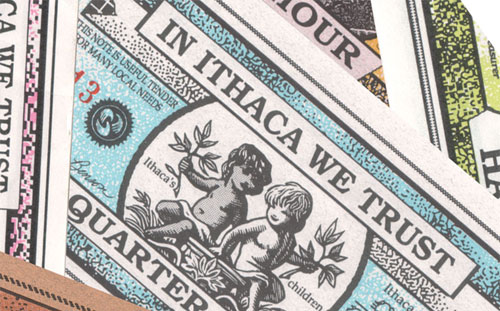 Local currencies have almost always been a part of the economic landscape in the United States. Indeed, even in Colonial times individual colonies, cities and even banks issued their own currency notes. The tradition has continued throughout the years, although the practice hasn't been much in vogue — until recently.

Since the most recent recession, local currencies have been on the rise again. Localities issue notes that can be used at businesses in a specific area, creating an economy that is more insular than that of the wider U.S. And, of course, because the currencies aren't accepted outside the retailers and tradespeople willing to accept the currency, more of the money stays in the local economy. There are even some digital currencies (beyond the money seen in virtual worlds like World of Warcraft and Second Life), used online amongst members who agree to honor the currencies.

Local currencies range from paper notes, to digital currencies, to metal-based. In some cases, states are drafting legislation that opens up the ability to use alternative forms of currency, usually gold and silver coins.

Would You Use a Local Currency?

The idea does sound nice: You boost the local economy, and create a situation where a currency has more perceived value. Plus, you keep your options open — just in case the Federal Reserve System falls to pieces sometime soon.

However, there are downsides to a local currency. One of the biggest issues is that any system of exchange relies on the idea that people have faith in it. Even something tangible, like gold, requires that people agree on its “value.” All forms of money and investment are subject, in some degree, to public perception. If the public perception of a local currency falters, then it could become worthless. And, if you have exchanged a large number of your Federal Reserve notes for a local currency that tanks, your losses could be quite large.

What do you think? Would you use a local currency?